Minecraft is Coming to the Big Screen 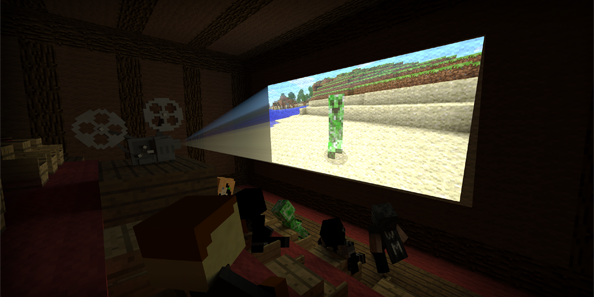 A vast majority of Minecraft’s 100 million registered users and dedicated fanbase are between the ages of 7 and 17. Instead of playing alone, they enjoy playing together. Minecraft is more than a quick after school game or a sleepover. Minecraft is entering the movie theaters.

During this Little League competition, Fortune stated, “Kids will form teams and play a first-person perspective version of Minecraft on their laptops, while a third-person perspective of the entire playing field with all teams is broadcast on the giant movie screen.”

“There’s also a fun socializing aspect we’ve created in the game to encourage gamers to move around the theater, check out each other’s builds, and basically hang out with each other,” says Super League Gaming president and Co-founder Brett Morris. “Unlike a movie screening, Super League gamers can be loud, yell across the theater to their teammate, and move freely inside the theater.”

Besides this being a great way for gamers to socialize and connect, the theaters are able venture beyond movies. Morris says theaters want to be able to be the go-to for all sources of entertainment. This also allows them to indulge in incentives because their percentage from league ticket sales will be larger than movie ticket sales.

As Minecraft’s popularity is growing every day, business collaborations with Minecraft are becoming accustomed to draw in more consumers and revenue.